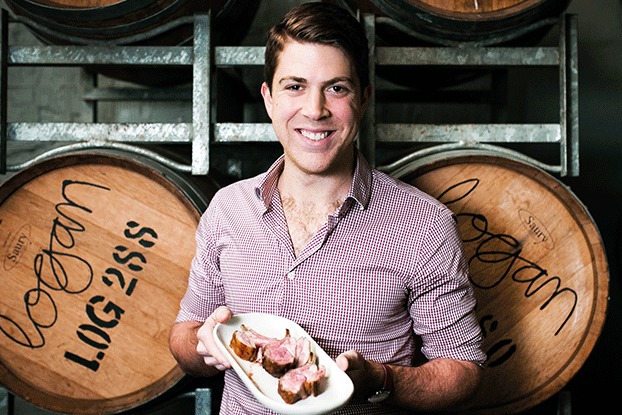 The Melbourne‑based foodservice meat wholesaler believes it’s the first meat company in the world to fully offset all carbon emissions, not only from its own business, but from every kilogram of meat it sells. Chief Executive Officer James Madden said the decision to pursue carbon neutrality had dual drivers.

“Last year we changed our name from Flinders Island Meat to Flinders + Co, to reflect the fact our portfolio of products had grown beyond Flinders Island,” James said.

“As part of that rebranding, we also spent time redefining our company vision and purpose. We came up with a company purpose to ‘cultivate a better food world’.

“One reason for aiming to ‘cultivate better’ is that we wanted to have a reason for our business to exist beyond just money – we wanted to work on something that makes a positive difference every day.

“The other reason was strategic. We looked at consumer trends and consumer purchasing drivers and could see that millennials, in particular, are prepared to pay a premium for produce that is sustainable, ethical and environmentally friendly.”

In 2017, James took part in the YoungFood Innovators program of MLA Donor Company (MDC), an experiencehe credits with driving his company’schange in direction.The Young Food Innovators programwas a 12‑month intensive, accelerateddevelopment program for youngpeople working in the red meat,horticulture, seafood and dairyprimary producer sectors.For participants from the red meatindustry, the program was supported byfunding from MDC and the Departmentof Agriculture and Water Resourcesas part of its Rural Research andDevelopment for Profit program.

“The Young Food Innovators programwas the cornerstone of this wholechange for our company,” he said.

“It taught me to focus on the consumerat a granular level; to listen to whatthey’re trying to say and why they’resaying it, and to act accordingly.

“MLA does a great job of gatheringconsumer insights, but a lot of the timeour industry can be slow to respondto them.

“We decided to look at what themarket was trying to tell us and picka demographic group to target; in ourcase, that was millennials, who researchshows are extremely loyal to brandsthey believe in.”

The business engaged the Carbon Reduction Institute to calculate its carbon footprint.

“The consultants analysed our wholesaling business in Melbourne, as well as each supplier’s carbon footprint on a per-kilogram-of-meat basis,” James said.

“Once we measured it, the next step was reducing our carbon footprint to zero. You can do that in two ways: reducing your actual emissions or buying carbon offsets.”

In terms of their own business, the Maddens were able to identify both short-term and long-term methods of reducing emissions.

“Straightaway, we switched to renewable energy for our electricity,” James said.

“We also identified that we could use more efficient refrigerants and delivery vehicles, which we’re in the process of switching over to now.”

In the long-term, Flinders + Co aims to encourage their suppliers to reduce emissions by sending price signals “back down the supply chain”.

“We can’t solve the carbon puzzle on-farm, but we can try to provide an incentive for producers to do it,” James said.

“In fact, we’ve already had one of our suppliers start the process of becoming carbon neutral, after seeing us do it. We’ve said ‘that’s great – if you do that we will be able to pay you a premium because we won’t have to offset your product’.

“We’ve also had a large agricultural company in Queensland approach us, saying ‘we’re interested in becoming carbon neutral and we’re keen to work with you’.

“We’re happy to hear from any potential suppliers who are carbon neutral already or are actively working to reduce emissions.”

For now, Flinders + Co is investing in carbon offset projects to offset their suppliers’ emissions, including purchasing offsets from one of their suppliers, Greenham Tasmania.

Sharing insights up the chain

James said another element of their business strategy was to share consumer insights with their customers – restaurants and other foodservice operators – derive maximum value for the entire supply chain.

“We’re looking beyond ‘how can we sell a kilo of meat to a restaurant?’ to ‘how can we help deliver more bums on restaurant seats and more people who will pay a premium for those seats?’,” he said.

“We want to share our market insights with our customers and demonstrate that they also need to be thinking about these things – sustainable, ethical, environmental – because it’s what consumers want.”

How producers can get involved

James’ advice for producers is to be open to the idea of becoming carbon neutral and to do plenty of research.

“Some people in the industry have said to us ‘you’re not really carbon neutral, you’re just paying to offset it’,” he said.

“Our response is ‘yeah you’re right, but if we wait for the perfect solution to come along we’ll wait forever, so we might as well get started’.

“The biggest thing producers can do is be open to it – think about it, read about it, talk to their processors about it.

“Smaller steps are probably easier than big steps, and it might just be a long series of small steps that get producers to hit the ground running when those premiums are there.”