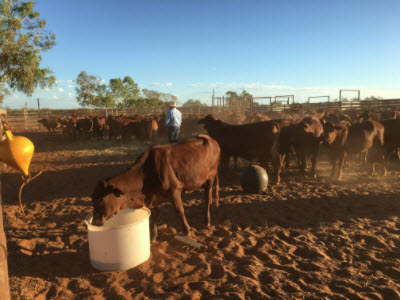 "It's having a genuine impact on pasture health, productivity of the animal and the business, animal welfare and farm safety."

Cattle are mustering themselves to new ground in a trial exploring how producers can take advantage of the animals’ natural behaviour.

Self herding (or self shepherding) involves triggering new behaviours linked to the animal’s sense of smell, sight or sound, to draw them to new location on the property. By broadening the grazing patterns of individual animals and the herd, self herding helps the animals become more resilient and adaptable.

Funded by Meat and Livestock Australia, the trail aims to establish whether the technique can be used to increase the consumption of less palatable food species in areas that livestock previously avoided.

These benefits align directly with priorities of the Framework; balance of tree and grass cover, health and safety of people in the industry, profitability across value chain and farm, feedlot and processor productivity.

“The technique works by using small rewards and cueing them with specific signals, and then taking those signals around the landscape,” Mr Maynard said.

“There are a variety of options; it might be a drum setup with an attractant [like food] in it scattered in the pattern you want them to follow, it might be a smell they easily recognise like strawberry cordial or it might be a Pavlov’s dog situation with a dinner bell or a referee’s whistle to bring them in. All of the techniques align with the animal’s physiology and natural instinct. After a while you can remove the associated reward because the behaviour has been wired. Occasionally the reward needs to be added back in as a ‘jackpot’ surprise to keep the cattle interested.”

Grazing animals form habits around what areas they visit in a paddock. Self herding can be used to change these habits to more evenly distribute the grazing pattern across the landscape, protecting grassland and vegetation from overconsumption, adverse soil surface impact or impact by urine and manure.

“Another benefit is diet diversity for the cattle,” said Mr Maynard.

“By visiting different areas, the cattle are receiving different nutrients in their feed, which acts as an incentive and encourages further diversity behaviours. It also helps to prepare the animals for events like drought because instead of relying on the same areas to provide their feed and continuing to return when the feed gets less and less, the herd is trained to experiment and explore.”

Self Herding reinforces positive stock handling techniques, which helps to adjust the relationship between the herd and workers. As a result, producers involved in the trial have found some stock are calmer when being handled in the yards.

“We had one producer who had come across the same cleanskin bull multiple times in the last three years, and the bull had cleared the fences and fled every time. Within five days of applying the self herding techniques, the bull was able to be within 20 meters of the staff without fleeing, and then got on the truck,” said Mr Maynard. “The technique means you’re training whole herds instead of individual animals and we’re seeing some genuine farm safety benefits.”

“Additionally, the range of Self Herding techniques are best when they’re not employed in a routine because the idea is to avoid building habits. This means it’s not only reducing time spent mustering, it’s also a flexible task that can be done when the worker has space.”

Self herding can be used in conjunction with already-existing tracking technology to help producers map where the cattle have been.

“Self herding is not a cookie cutter approach by any means, but the exciting thing is it’s on the ground and it’s having a genuine impact on pasture health, productivity of the animal and the business, animal welfare and farm safety.”

The current trial will continue until mid-October this year, and then Mr Maynard will be working with producers in Western Australia to investigate the benefits of self herding in feedlots.

*Mr Maynard is working with Dr Dean Revell from Revell Science on this project. A trial is also being conducted in the Western Australian rangelands and is supported by Rangelands NRM and the Australian Government.